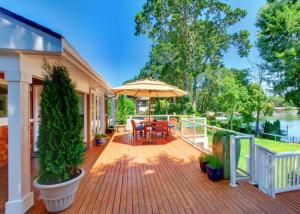 SMITHFIELD, RI, UNITED STATES, November 10, 2022 /EINPresswire.com/ -- According to the local deck company, RI Deck and Patio Builders, residents need to be more aware of problems that could arise with their deck. Many residents in Rhode Island turn to this repair company for deck repair, installation, sealant, and more. However, many homeowners in the local area also use their decks regularly without ensuring they are safe. As a result, this could put the homeowner at risk for deck collapse and make them liable for injuries sustained by guests at home. To minimize these possibilities and save money, the RI Deck and Patio Builders team encourages homeowners to spot the signs of deck repair and get annual maintenance on their decks. Here are some obvious signs that the deck needs repair.

One of the main reasons homeowners will have to get deck repair is that their decks suffer from water damage. A variety of things can cause water damage to a deck. One reason a deck may have water damage is that homeowners store moisture-forming items on the deck. These include improper rugs, pet toys and bowls, rags, and other moisture-rich items that can sit on a deck, causing the wood to rot.

Along with water damage comes the possibility that wood boards can become warped and loosen. This usually happens when a deck sustains water damage over the long term. For example, long-term drips from some other portion of the house, soaked rags, or some other consistent moisture buildup can cause deck boards to cup. It can also cause nails to rust and loosen from the deck joists. As a result, this could create a severe trip hazard for guests. It could also cause splintering or cracking, leading to other injuries for guests walking on the deck.

Besides destroying the wood portions of the deck, water can also destroy metal parts of the deck. These include nails and fasteners that hold the deck in place. As a result of prolonged water damage, nails and connectors can rust. This can cause the deck to loosen in certain areas and even cause it to detach from the house. As a result, this could put yes in jeopardy of injury from deck collapse.

Deck collapse isn't the only danger inherent from rusty metal parts on a deck. Rusty nails can loosen from the wood deck and remain exposed on top of the wood. This could create a hazard in which the homeowner or the homeowner's family and guests could sustain injury from stepping on a nail. Unfortunately, this injury could lead to a very infectious disease called tetanus. This type of injury may require a vaccine and, if left untreated, could spread bacteria throughout the body and even result in death.

Water isn't the only problem homeowners may face regarding decks. Another serious issue the homeowners could face with wood decks is pest problems. One of the most common pest problems is termites. Not only will termites destroy the wood deck, but they can also move to other areas of the home, destroying the wood structure and creating costly pest control issues for homeowners. In addition, carpenter ants, wood borers, and powder post beetles may attack a deck. Prolonged damage from such insects can make a deck unstable and compromise its structure.

Wood-destroying pests aren't the only types of pests attracted to decks. Home decks can also become a nesting ground for other pests such as mice and rats. Additionally, raccoons, opossums, woodchucks, and other wildlife can make homes under homeowners' decks. As a result, a deck company may have to install a deck skirt to minimize the possibility of these animals infesting the house.

Another apparent sign that homeowners need deck repair is rickety railings. This could put small children at risk for injuries from falls. Or it could even place homeowners and their guests at risk of tumbling off the deck, mainly if the railing is loose where the stairs are.

While all these or significant signs that a homeowner will need deck repair, not all deck repair needs will be apparent. This is why it is a better idea for homeowners to establish regular inspections on their decks as a preventative measure. Regular inspections every three to four years will help maintain the structural integrity of a deck and minimize liability from injuries. If the deck is over 15 years old, a homeowner should consider replacing it.

Please reach out to their local deck builders if you require repairs! Their address is 445 US-44, Smithfield, RI 02917. Call or fill out a contact form for a free quote on their website.