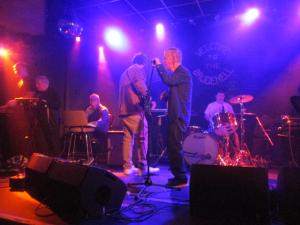 Post-punk band Ultimate Thunder are challenging the lack of creative opportunities for people with learning disabilities upon release of their debut album.

LEEDS, BRISTOL, UNITED KINGDOM, November 24, 2022 /EINPresswire.com/ -- Disability arts, including music, is probably one of the most underrated activities undertaken by people with disabilities. Learning disabled people often feel they are excluded from the arts; there are few opportunities where they see themselves in the arts and research from Mencap states that just 10% of the public say they’ve seen someone with a learning disability featured in the media or on TV.

However, all that may change with the rise of Ultimate Thunder, a seven-piece post-punk band from Leeds, which has been taking the city by storm after releasing its self-titled debut album.

Six out of the seven band members have a learning disability, offering a welcome disruption to social and institutional barriers that may previously have prevented their recognition and success.

Having been around in various guises for 11 years, this summer Ultimate Thunder released its self-titled album, featuring a mix of garage, post-punk and krautrock flavours. The album, which is now available digitally and on vinyl, was made possible by £43,000 of funding from the Arts Council and ongoing support from Leeds-based arts charity, Pyramid.

Sarah Cockburn, Operations Manager at Pyramid, spoke about how they came to support Ultimate Thunder: “A few years ago, we were approached by the band as they had lost their rehearsal space and needed somewhere new to practise. We welcomed them into our studio and became instant fans! We were able to offer further support by investing in equipment, and inviting them to perform live at our events.

“We are very proud to have Ultimate Thunder on our roster of artists, and the overwhelmingly positive reviews of their debut album, along with sales figures, very much prove our point that people with a learning disability often have great artistic potential and will thrive in the right creative environment.”
Both Hft and Pyramid recognise that often there are significant barriers, including accessibility barriers and stereotyping, that prevent people with learning disabilities to initially discover and develop their talents, and to later gain recognition and achieve success.

Ultimate Thunder, however, has already been exposed to notable exposure in the UK, earning itself a reputation as a master of improvisation and “the most punk-rock band in Britain”, according to The Big Issue. Frontman Matthew’s on-stage performances have even been compared, by The Guardian, to those of the late Mark E Smith from The Fall.

When asked what he likes about being in Ultimate Thunder, Matthew said, “I really enjoy it, it’s fantastic and so is James (the guitarist)." The band’s most recent performance was at the Brudenell club in Leeds in early October. They completed the line-up for an all-day event and performed alongside Fujiya and Miyagi, Moreish Idols and Rainn Byrns.

Frontman Matthew has also been busy with rehearsals for the Hft 60 song- a song that is being put together by the charity to showcase talent among people it supports and celebrate its 60th birthday this year.

Looking to the future, Matthew said Ultimate Thunder would love to perform at a music festival and album number two is already underway to help the group reach this goal.